T/Sgt. Paul P. Banis
Born: July 31, 1921
Missing in Action
December 17, 1944
Banis Square is the intersection of Dorchester and Houghton Streets. A street-sign-style marker stands on the corner, as usual, but the stone and plaque have been moved into the corner lot which is now Banis Park. The dedicatory plaque is shared by Joseph and Paul, presumably brothers or cousins, though I have yet to confirm that.﻿
Joseph served with the 329th Infantry, 83rd Division. We met them before, at Kirminas Square. They fought their way across Normandy, through the Battle of the Bulge, and deep into Germany. Joseph, unfortunately, did not make it beyond Normandy.
Paul served aboard a B-24 Liberator bomber piloted by Theodore King.Although he is listed as Missing in Action, we do know what happened to him:
"I, Staff Sargeant Kenje Ogata, 16037445, was ball turret gunner on an airplane in the same flight as First Lieutenant Theodore C. King, flying aircraft number 42-51941. On 17 December 1944, Lieutenant King was flying number two position, deputy flight leader, on a mission over the Odertal oil plant in Germany. Shortly after passing over the target the lead airplane seemed to be pulling out of the formation and Lieutenant King, in the deputy lead position, moved to take over the lead. As Lieutenant King let down his tail hit the number one propeller of the lead ship as it was coming back into its former position. I saw Lieutenant King’s airplane spiral down and go in a flat spin. The tail of Lieutenants King’s aircraft was sheared off. The weather was clear and just before the plane hit and burst into flame I saw one parachute open. This was at about 1255 hours at approximately 50 28N 18 04E, in Germany."

The single parachute belonged to S/Sgt. Joseph Weisler, the only man to make it out of the plane. He spent the rest of the war in a POW camp. Since the rest of the crew was never recovered, they remain listed as missing.
Posted by David O'Neill at 11:24 AM 5 comments:

in Memory of
Sgt. Cornelius F. Kelley
Born: December 18, 1887
Died of wounds received in battle
Verdun, France
October 13, 1918
Sgt. Kelley was a man of unquestioned bravery, which is just as well given that his memorial overlooks Kelley Square. This nightmare of an intersection needed some sort of name, so it became one of the few (if not only) memorial squares with a name that people regularly know and use. The WPL site describes Kelley Square as the intersection of Green and Harding streets, but in common parlance, the name is applied to the entire mess which is the confluence of Vernon, Water, Harding, Green, Madison, Harding again (the only street that runs through the square instead of terminating there), and Millbury streets.

As evidence of his unquestioned bravery, I submit his citation for the Silver Star (France threw in a Croix de Guerre to go with it.):

After surviving the offensives of Champagne-Marne, Aisne-Marne, St. Mihiel, and Meuse-Argonne, Sgt. Kelley died as a result of a mustard gas attack less than a month before the end of the war.
(I apologize for reverting to the low quality pics from my cell phone. As Chris’s schedule permits, this will be improved.)
Posted by David O'Neill at 12:50 PM No comments: 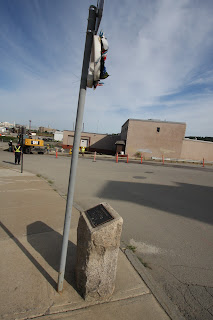 ﻿The memorial to Vincent Tovisio stands at the intersection of Franklin and Suffolk streets. It is among the minority of memorials that tells us what unit he served with, which made his story comparatively easy to track down.

Private Tovisio's war was hardcore trench warfare: alternately going over the top into no-man's-land in the face of machine gun fire, or watching the enemy come over their top and coming at you with flamethrowers, and under constant shelling, whether coming, going, or just hunkering down. The 308th fought in a number of battles, but they were all the same. Hold this spot, take that one, see whether you can tell them apart... About a month after his death, part of the 308th (though not Co I) would gain fame as the Lost Battalion, when they were cut off from their own lines and took heavy causualties. But heavy casualties were the order of the day; even before that incident, the unit had more replacements than surviving original troops.

The history of the 308th is sufficiently well documented that I can say what they were doing the day Private Tovisio died. They had recently been through one major battle; they were shortly to go into another. But shades of All Quiet on the Western Front, on September 16th, they were taking a break. An Italian regiment was moving in to take over their position, and the 308th had the day off - from everything but the shelling. They counted it as an easy, non-combat day, and at the end of it they moved out, but without Vincent Tovisio. 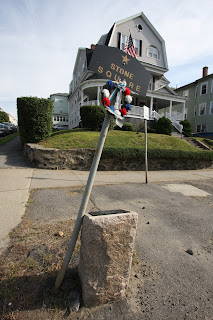 in Memory of
S 1/C George L. Stone
Born: March 16, 1919
Killed in action aboard USS Quincy, Sayo Island
August 9, 1942
The beginning of World War II found the heavy cruiser USS Quincy﻿ in the Atlantic on convoy duty. In 1942 whe was transfered to the Pacific fleet to take part in the ivasion of Guadalcanal. The Japanese had taken the Philipines from the US, Malaysia from the British, and the East Indies from the Dutch, and were gobbling up the rest of the Pacific. They had taken Guadalcanal, the largest of the Solomon Islands, in May. US Marines landed in August, and the ground fighting would continue for six months before the final Japanese evacuation.
The invasion began August 7th. The Quincy shelled Japanese positions before the landings, and provided anti-aircraft fire and artillery support for the troops once ashore. By the end of the 8th, she was stationed to the north of the beachhead. Before sunrise on the 9th the Japanese fleet attacked, and the Quincy's battle turned into an old fashioned ship-to-ship artillery duel.
The USS Quincy was the first ship to sink in an area that became known as Ironbottom Sound. She has been reported to still be sitting, upright, though missing her bow forward of the gun turrets, in 3000 feet of water. Nearly half her crew, including her captain and Seaman Stone, went down with her.
George Stone's memorial stands at the intersection of Hamilton and Almont streets.
Posted by David O'Neill at 10:19 AM No comments: 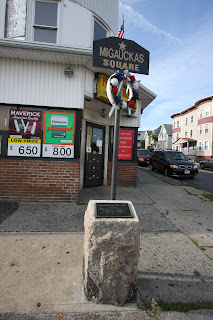 The memorial for Sgt. Migauckas stands at the intersection of Providence and Harrison streets. He was a graduate of Holy Cross '14, and apparently a lawyer, so I'm a bit surprised to find him in the ranks rather than commissioned.﻿ This entry is quoted from Holy Cross College Service Record, War of 1917, published by the college:
"Lawyer. Worcester, Mass. He enlisted with the 101st Regiment of U.S. engineers in May, 1917, at Boston, Mass. Here he received the usual training in the Boston Armory and was made a corporal. He sailed for France, September 24th, 1917 and was there assigned to an officer's training school. With the rank of Sargeant he was in the engagements at Chateau Thierry, Marne River and St. Mihiel, and was killed by a machine gun bullet through the heart at St. Mihiel, September 12, 1918."
Posted by David O'Neill at 9:06 AM 1 comment: 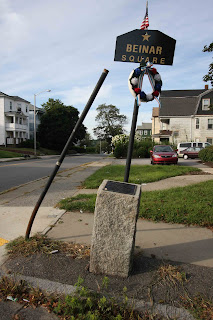 Theopilus Beinar signed up in February of 1942, a couple of months after Pearl Harbor. Whatever he was before the war, he must have brought something into the service, because though enlisted as a Private, it was apparently already intended that he be made a warrant officer. As it turned out, he was commissioned a 2nd Lieutenant and assigned to the 545th Bombardment Squadron, in the 384th Bomb Group.
He served as a navigator on B-17 Flying Fortresses on at least nine missions, one of which ended with a bad landing that destroyed the plane, though the crew was not injured. His last flight was aboard the 42-31048 - if the plane had a nickname, or nose art a la Big Chief Cockeye﻿, I found no record.
The April 13th mission targeted a ball bearing plant in Schweinfurt, Germany. Ball bearings were used in planes, trains, tanks, and the entirety of German industry, so the bombing would certainly have made sense. And, of course, it made sense for the Germans to try to stop it. Of 23 Flying Fortresses on the mission, six were lost. Some of the crewmen made it to earth, to become POWs, but this only included one person from Beinar's plane.
Lieutenant Beinar's memorial stands at Vernon and Harlem Streets.
Posted by David O'Neill at 11:48 AM 4 comments: